Carolinas brace for heavy snow; 25 million in the South under winter weather alerts 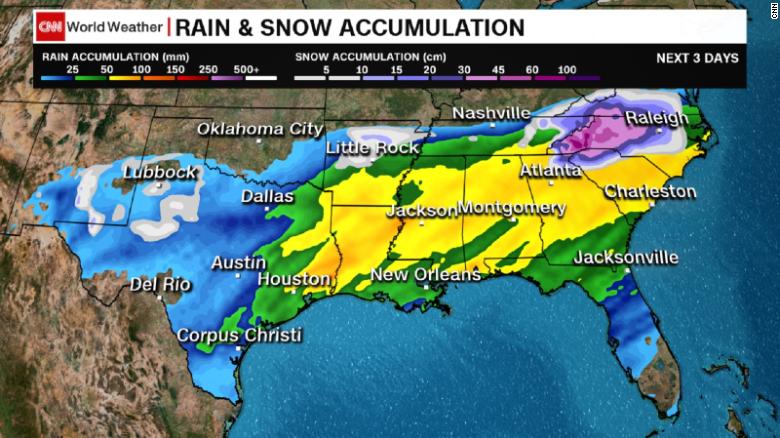 (CNN)The winter storm sweeping across the southern United States revealed its power Saturday by dropping 10 inches of snow on Lubbock, Texas -- 2 inches more than the city usually gets in a whole year.

"They crushed their yearly average in 24 hours," CNN meteorologist Ivan Cabrera said.
Having done its work in Texas, the storm will move east and is expected to pound the Carolinas with heavy snow Sunday, followed by rain, Cabrera said. Sleet and flooding are also possible across the South.
As much as 6 inches of snow might fall in Charlotte, North Carolina, and ice accumulations of a quarter of an inch to half an inch are possible.
"Six inches will shut that city down," CNN meteorologist Allison Chinchar said. "It's very much like any other Southern city ... where they don't have the resources that a lot of other cities have. They have few salt trucks, few snowplows. It takes them longer to clean something like that up."

Power outages are likely and air travel will be restricted. More than 1,000 Sunday flights have already been canceled at Charlotte Douglas International Airport, according to FlightAware, a flight tracking service.

Many churches in the Charlotte area have preemptively canceled Sunday services, CNN affiliate WSOC reported, and the city of Charlotte is prepping emergency shelters. Grocery store shelves have been cleared of bread, milk and other staples.
North Carolina authorities declared a statewide emergency.
"Snow may be beautiful but it can also be treacherous and I urge North Carolinians to take this storm seriously and get ready for it now," Gov. Roy Cooper said in a statement.
Very heavy snow is forecast for the Appalachian Mountains, CNN meteorologist Haley Brink said, with Asheville, North Carolina, and Roanoke, Virginia, predicted to get 12-18 inches. Social media showed snow falling Saturday night in Asheville.
At lower elevations, Raleigh, North Carolina, and Richmond, Virginia, are expected to see 4-6 inches of snow.
Atlanta will probably see rain but not snow, Cabrera said, though northeast Georgia might. The weather could slow air traffic at Hartsfield-Jackson International Airport.

More than 25 million people are under winter weather alerts from Oklahoma through Virginia, and more than 10 million are under a flood threat from the Gulf coast to South Carolina.

Eastern Tennessee, Georgia and the Carolinas 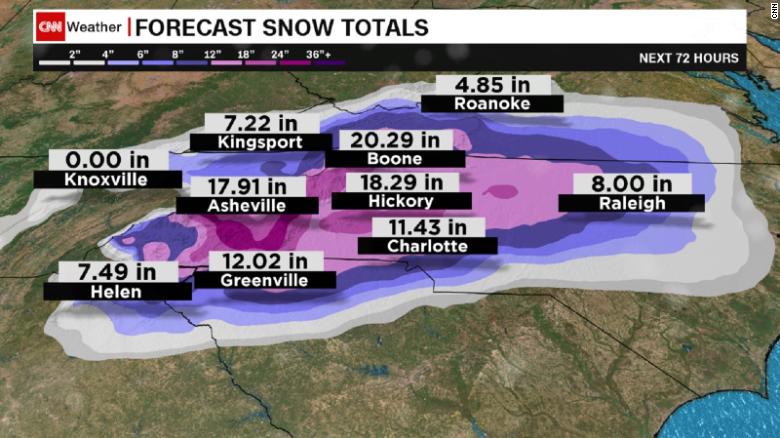 The culprit is a moisture-heavy storm that brought downpours and flash flooding along the southern edge of Texas and snow and ice in the north. As that moisture moves eastward, it is colliding with a high pressure system over the Ohio Valley that is funneling cold air into the region.
"It's kind of a big deal," Chinchar said. "It's December. This is not the time of year that they would typically get this stuff."
Parts of North Carolina could see record snowfall, described by the National Weather Service as a "once-in-a-generation event."
"This storm comes at a time of year when North Carolinians are usually hearing carols about snow, not actually seeing it. But this time, the real thing is headed our way and North Carolina is getting prepared," Cooper, the North Carolina governor, said, according to WSOC in Charlotte. "A winter storm's not a Christmas carol snow. It's serious, and you need to take steps now to get your family ready."
The flooding and winter precipitation may also affect Georgia. Heavy rain with 1 to 3 inches is projected Saturday, with "rates expected to be high at times, increasing the threat of flooding," the weather service said.
About 1 to 2 inches of snow could fall in the higher elevations of North Georgia, with up to 5 inches on the highest ridges Sunday night into Monday. Possible freezing rain and dusting snow could also reach the I-85 corridor. 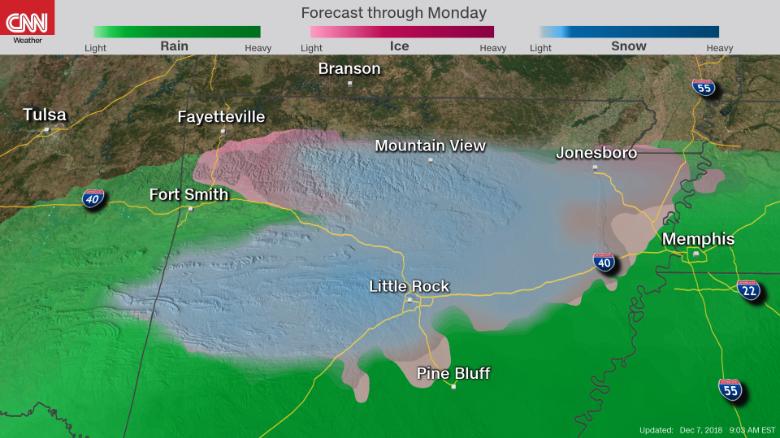 Half an inch of ice may coat trees and power lines from Little Rock, Arkansas, to Nashville, Cabrera said.
The National Weather Service predicted 1-3 inches of snow in north and central Arkansas with isolated areas exceeding 4 inches in the northeast.
The southern half of Arkansas faced up 4 to 5 inches of rain, with flash flooding possible. The higher elevations of the Ozark Mountains were expected to see 2 to 6 inches of snow on top of a glaze of ice up to a quarter of an inch.
Snow totals will be lower in northeastern Arkansas and northwestern Tennessee, where a trace to 1 inch of snow is possible. 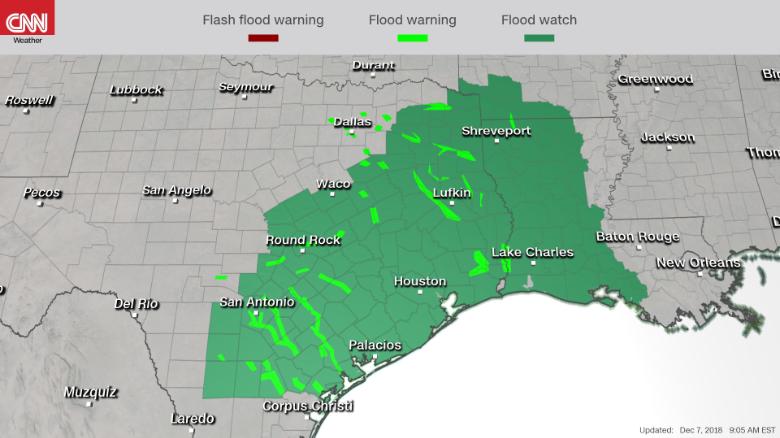 After the heavy rain in Lubbock, many community activities were disrupted. The city holiday parade was postponed and Texas Tech rescheduled all Saturday final exams until Sunday, CNN affiliate KCBD reported.