High Winds Cause Destruction, Power Loss To Thousands In U.S. And Canada 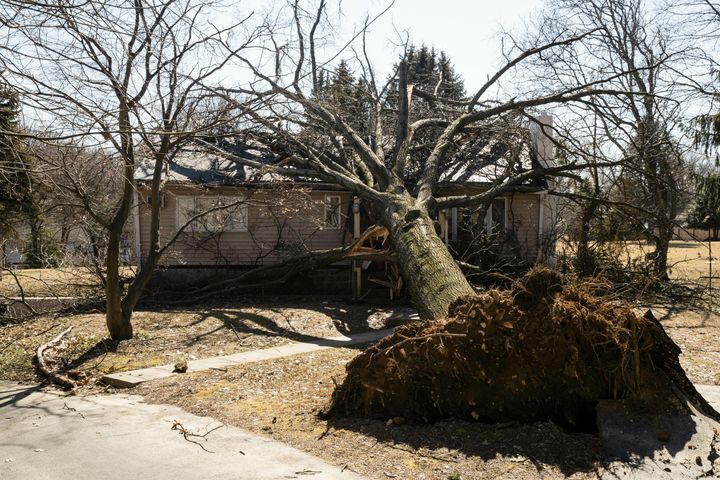 Extreme winds have toppled trees, ripped away roofs and cut power to hundreds of thousands of homes and businesses across parts of the U.S. and Canada this week, with some gusts reaching hurricane strength.

At New Hampshire’s Mount Washington Observatory, New England’s highest point, wind gusts reached 171 mph on Monday, breaking the month’s previous record of 166 mph set in 1972. The strongest gust ever recorded of 231 mph was in 1934, according to the observatory.

Meteorologist Tom Padham, who works at the observatory, described the powerful wind as coming around once every 10 or 15 years.

“There is a constant low rumble, at least to the building,” he told New Hampshire Public Radio on Monday. “And then outside it is absolutely a deafening roar.”

Wind advisories and warnings were in effect on Monday from the Midwest to the Northeast, prompting hundreds of schools in areas as far apart as New York and Ohio to close or have delayed starts.

In addition to the more common reports of power outages and downed trees, there were more unusual instances of destruction seen.

In western Maine, the wind’s strength was on full display atop Sugarloaf Mountain where a communication tower had doubled over after it was hit with winds approximated as topping 100 mph.

In Clinton, Massachusetts, incredible video captured a corrugated roof being blown into the air like tissue paper before landing within feet of passing cars.

Elsewhere in the country, a passerby filmed a semi-truck being blown onto its side along a highway in Sandusky, Ohio. The Ohio State Highway Patrol said no injuries were reported, the Sandusky Register reported.

In Bradley, Illinois, a gas station’s canopy collapsed in its parking lot due to high winds, according to local police. A similar scene was seen at a gas station in Watertown, New York.

Then up in Ontario, Canada, on Sunday, incredible video captured winds hurling a wave of ice over the Niagara River Parkway’s retaining wall.

The high winds were the result of a low-pressure system that traveled from the southwest to northeast before exiting the U.S. on Monday, according to the National Weather Service. The wind was forecast to begin slowly weakening on Monday night in the northeast.