7.2 Magnitude Earthquake Hits Papua New Guinea, So Powerful It Was Felt in Australia 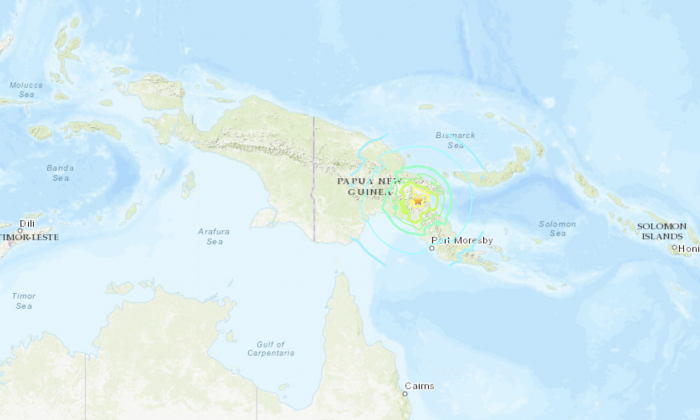 The powerful quake was so strong it was felt in parts of Australia’s far north about 600 kilometers (373 miles) away.

The epicenter of the quake was in Papua New Guinea’s east—about 34 kilometers (21 miles) from the town of Bulolo in Morobe Province.

To everyone’s relief, the Australia’s Bureau of Meteorology confirmed that there is no tsunami threat in a tweet just before 8 a.m. local time.

According to the Pacific Tsunami Warning Center, there was no risk of any tsunamis in the area because of the depth of the quake’s epicenter.

The country’s National Disaster Management office, based in Moresby, said there are no immediate reports of damage but that news could take some times them to emerge.

“We are awaiting assessments,” a spokesman told AFP.

There are estimated to be around 110,000 people living within 50 kilometers of the epicenter, according to U.N. data.

People in the area took to social media to post footage of the quake.

Christopher Lam was in Lae, about 100km north of Bulolo, and said he could hear the earthquake.

“You can hear it. Got stuff thrown around in the house and the power is now cut off,” he wrote to Twitter with a video of his home during the quake.

Last year in February, Papua New Guinea was struck by a 7.5 magnitude quake. It buried homes and triggered landslides, and killed 150 people.

But news of the damage didn’t become apparent for days because of the country’s poor communications and infrastructure.

Papua New Guinea sits on the Pacific Ring of Fire—a path along the Pacific Ocean where frequent earthquakes occur due to friction between tectonic plates.