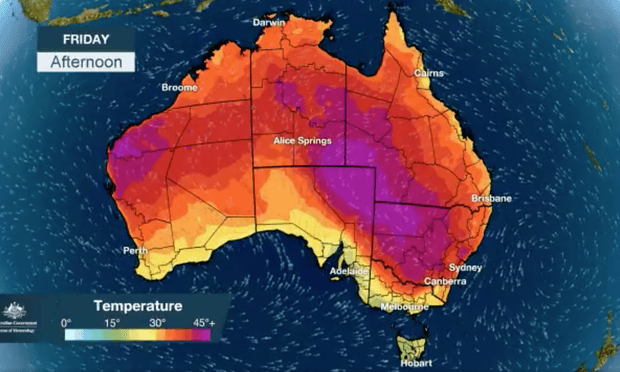 On fifth day of record-breaking extreme weather, temperatures in parts of Victoria, ACT and NSW forecast to soar above 40C, including in Sydney’s west

Extreme temperatures are persisting – and even peaking – in Victoria and New South Wales on the fifth day of Australia’s extraordinary, record-breaking heatwave

On Friday, parts of NSW and the ACT were again forecast to soar above 40C – for the fifth day in a row.

Nine records were broken in NSW

In Penrith in Sydney’s west, temperatures will hit 45C, up from 42C on Thursday. In Menindee – the site of mass fish kills in the Murray river – another 45C day is on the cards. It reached 47C on Wednesday and Thursday, and the maximum temperature hasn’t been below 45C since Monday.

Rebecca Farr, a forecaster for the Bureau of Meteorology, said Canberra would break the record for the longest stretch of over-40C days since records began in 1939.

“For Canberra, today we are forecasting 40C and, if we reach that, it will the the first time on record that we will have four consecutive days of 40C or more,” she said.

“Broken Hill is forecast to hit four consecutive days of 45C, and that also hasn’t happened before. Records there started in 1957.”

The northern regions of Victoria, including Mildura, Shepparton and the border towns of Albury-Wodonga, will also stay above 40C.

But southern and coastal regions will experience the welcome relief of sub-30 temperatures and even rain. Melbourne is set for a maximum of 28C, Geelong 26C and Warrnambool 21C.

It will also cool in South Australia, at least compared with the record-breaking 48.9C recorded in Port Augusta on Tuesday.

Temperatures will still hover in the 30s but the stretch of nearly-50C temperatures looks to be over.

But central Australia will remain scorching. Oodnadatta – one of the hottest 15 places in the Earth this week – will still sit at 46C.

Read more
In NSW, the towns of Ivanhoe, Bourke and Wilcannia are all facing 46C. Gundagai will swelter through 44C, which is only slightly down on the 45C experienced on Wednesday.

Farr said the summer had smashed records across the state.

Temperatures in NSW are expected to drop over the weekend. Menindee is set for 36C with some cloud cover and Penrith 32C. Wilcannia and Ivanhoe will drop to 40C, but Bourke is set to stay hot at 45C on Saturday, and hold at over 40C through all of next week.