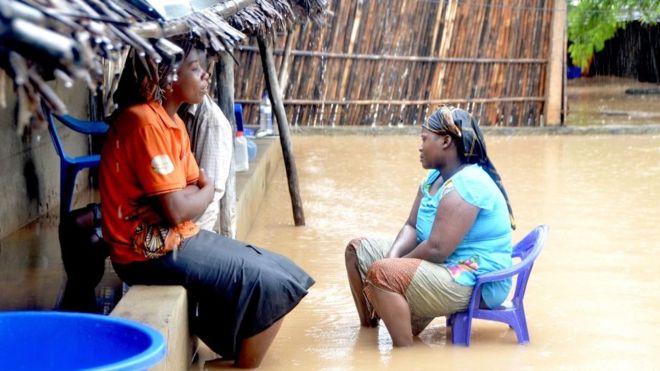 Mozambique requires urgent life-saving relief to deal with the destructive aftermath of Cyclone Kenneth, an aid organisation has said.

Save the Children says the humanitarian situation is significant and life-threatening and more funds are needed.

The UN gave Mozambique and Comoros Island $13m (£10m) for food, water and repair of infrastructure.

The death toll in cyclone-hit northern Mozambique is 38, but is expected to rise, officials say.

Meanwhile aid workers are scrambling to reach the areas that were worse hit by the cyclone.

It lost its strength, but torrential rain was still battering the area on Tuesday, with more expected.

As a result, aid efforts by air have been hindered.

It is predicted the weather system will dump twice as much rainfall as Cyclone Idai, which struck last month, leaving more than 900 dead across southern Mozambique, Malawi and Zimbabwe.

The flood risk was compounded by Kenneth hitting at the end of the rainy season when river levels were already high, the UN Office for the Co-ordination of Humanitarian Affairs (Ocha) noted.

Already, Pemba, the regional capital of Cabo Delgado state, has experienced more than 2m (6.5ft) of rain and flooding.

What's the latest?
Aid workers have been trying to deliver medical and food supplies to people cut off by the flood waters before more rain falls on Tuesday.

Nicholas Finney, Save the Children's response team leader, says that poor people in the region have been hardest hit.

"Those who were already living on the brink of poverty have now been left with nothing. With donations dwindling, we're facing a critical situation," he said.

According to Mozambique's National Institute of Disaster Management (INGC), 38 people have been killed by Cyclone Kenneth, while another 35,000 homes have been destroyed or damaged.

The privately-owned O Pais website reported five people died after part of a rubbish dump collapsed onto homes in Pemba on Sunday evening. It is unclear if these deaths are recorded in the government total.

Ocha says humanitarian needs "have sky-rocketed, and the humanitarian response will need to rapidly scale up".

Some 200,000 people are in danger in Pemba alone, Ocha warned. Spokesman Saviano Abreu added that the situation in the northern towns of Macomia and Quissanga was critical, while there were also worries for the cut-off island of Ibo.

But attempts to reach those areas had not been entirely successful.

"We managed to send one flight with World Food Programme (WFP) supplies of rice and biscuits, and some non-food items," Mr Abreu told news agency AFP.

"But unfortunately the weather conditions are changing too fast and threatening the operation. It's raining again and the second flight couldn't go."

This satellite image shows the cyclone over northern Mozambique and Tanzania on Friday night.

On Sunday a spokesman for UN Secretary-General Antonio Guterres said he was appealing for "additional resources" from the international community "to fund the response in the immediate, medium and longer term".

Is it common for two cyclones to hit back-to-back?
Tropical cyclones in this part of the Indian Ocean are not that rare.

However, according to the BBC's Environment Correspondent Matt McGrath, Cyclone Idai was the seventh such major storm of the Indian Ocean season when it struck back in March. That is more than double the average for the time of year.

What's even more unusual, however, is the fact Idai and Kenneth hit in such quick succession.

According to the World Meteorological Organization (WMO), "there is no record of two storms of such intensity striking Mozambique in the same season".
It is especially unusual in the context of the trend which has seen tropical cyclones in the region decrease slightly over the past seven decades.

But it is far too early - and too small a sample size - to say whether this frequency is a direct result of climate change. Instead, experts point to other elements making the storm's impact worse which they know are related to climate change.

"There is absolutely no doubt that when there is a tropical cyclone like this, then because of climate change the rainfall intensities are higher," Dr Friederike Otto, from the University of Oxford, told the BBC in the aftermath of Cyclone Idai.

"And also because of sea-level rise, the resulting flooding is more intense than it would be without human-induced climate change."

What is the affected area like?
Cabo Delgado province is not as densely populated as the area hit by Cyclone Idai, and there is apparently more high ground there.

That, in addition to warnings by authorities ahead of the storm, could significantly stem losses compared with Cyclone Idai.

But reports said many thousands of homes had been flattened by the winds, and the area has been hit by militant Islamist violence in recent months, which could complicate humanitarian operations.

Thousands of people had already fled their homes to seek shelter from violence in camps for displaced people.