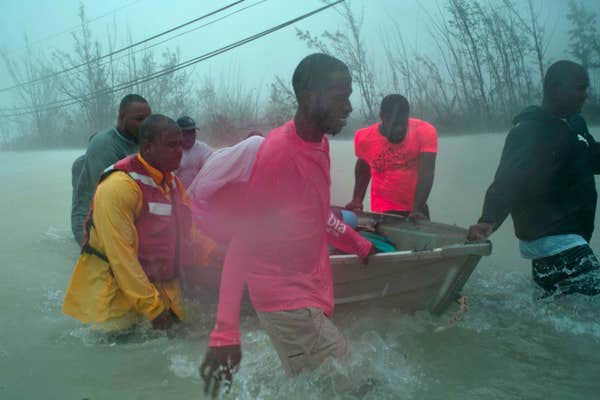 The trail of destruction left by Hurricane Dorian on the Bahamas was revealed today as aid agency workers described “apocalyptic” scenes when they reached the worst-hit areas.

Bahamas prime minister Hubert Minnis confirmed seven fatalities so far but added: “We can expect more deaths to be recorded. This is just preliminary information.”

He told a news conference the Bahamas was “in the midst of one of the greatest national crises in our country’s history” as rescue workers from around the world rushed to reach thousands believed to be stranded in floodwaters.

“It’s total devastation. It’s decimated … apocalyptic,” said Lia Head-Rigby, who helps run a local hurricane relief organisation and flew over the devastated Abaco islands. “It’s not rebuilding something that was there — we have to start again.”

Ms Head-Rigby said her representative on Abaco told her that there were “a lot more dead” and that bodies were still being found.

Rescuers were trying to locate victims on the low-lying Grand Bahama island last night as the hurricane bore down on the US east coast.

About 60 per cent of Grand Bahama was under water early today.

“It’s like we just need to be rescued and put on another island to start over again,” said March Harbour resident Cindy Rusell, whose home was destroyed. “It’s complete devastation,” she added.

Sarah Kirkby had her home in Freeport, Grand Bahama, washed away and said: “It was absolutely terrifying. I have never seen water come in like that. You don’t realise the power until you’re in it.”

The hurricane had sustained winds of about 105mph as it moved to Florida’s coast, coming within about 90 miles of Cape Canaveral.

More than two million people in Florida, Georgia and North and South Carolina have been warned to evacuate. The threat of a direct hit on Florida is thought to have all but receded, but experts said Dorian could strike North Carolina tomorrow or on Friday.