Tornadoes have ripped through several Midwest and southern states in a rare and unexpected occurrence for December.

Residents in central Illinois on Sunday assessed the damage after 22 rare December tornadoes, including one the day before that was a half-mile-wide, ripped roofs off homes in Taylorville, downed power lines and injured at least 20 people.

The severe weather in Illinois was part of a line of thunderstorms that raked areas of the central US late Friday and into Saturday, killing one person in Missouri's EF1 tornado.

The National Weather Service confirmed tornadoes in Illinois, Missouri, Oklahoma and one in Georgia that injured four people at Kings Bay Naval Submarine Base Sunday afternoon.

At least three tornadoes were confirmed in northwest and southwest Arkansas, which largely caused property and structural damage. No injuries or fatalities were reported.

Peak months for tornadoes in much of the Midwest are April and June, according to the weather service. 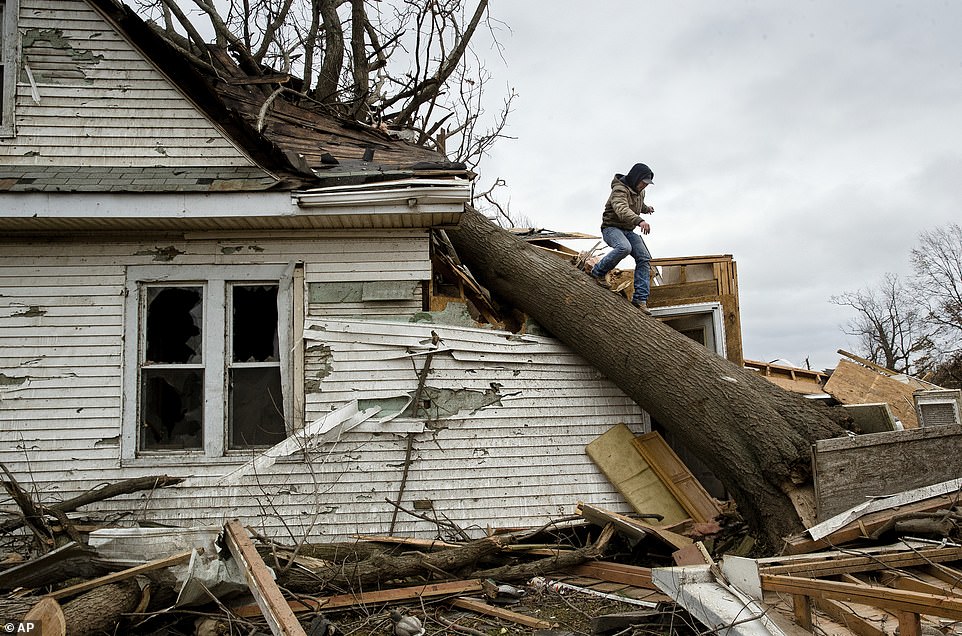 Rodney Henry scurries down the trunk of a large tree that fell onto the home of Chris and Dennis Metsker Sunday in Taylorville, Illinois 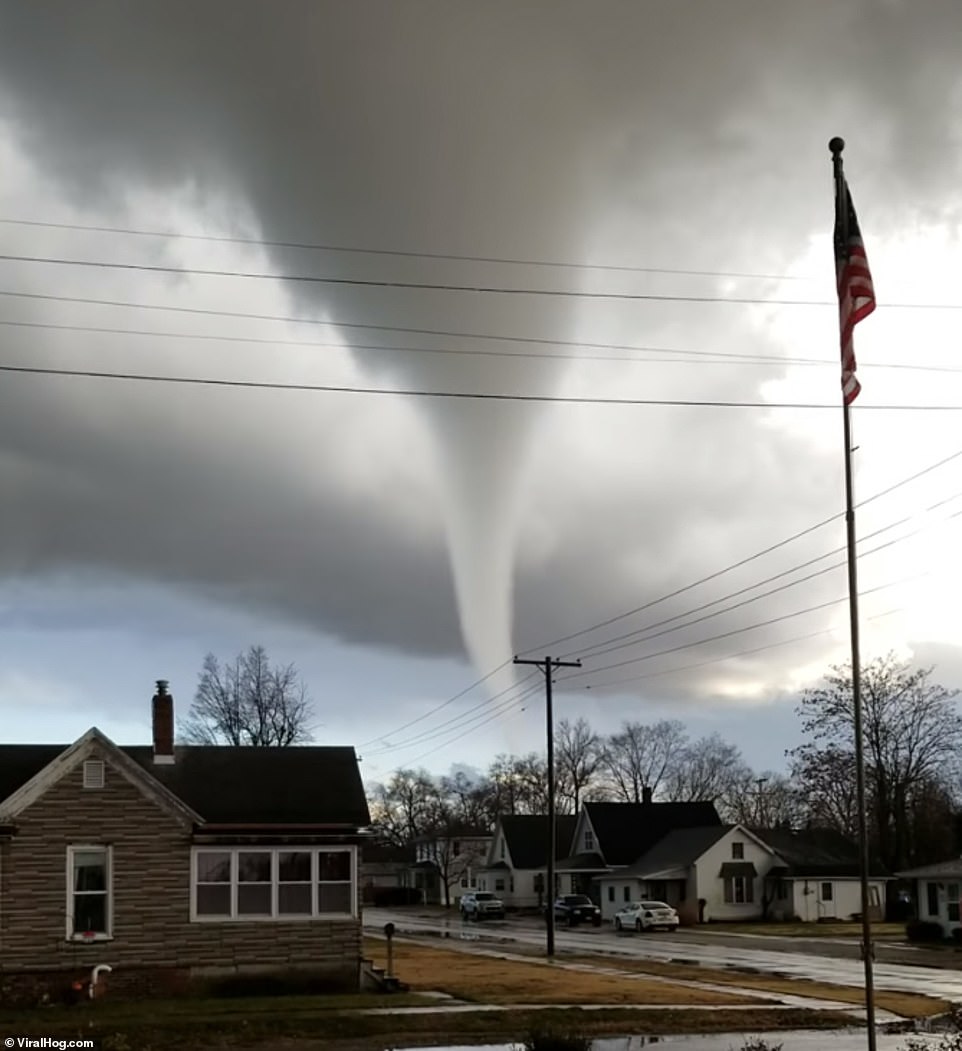 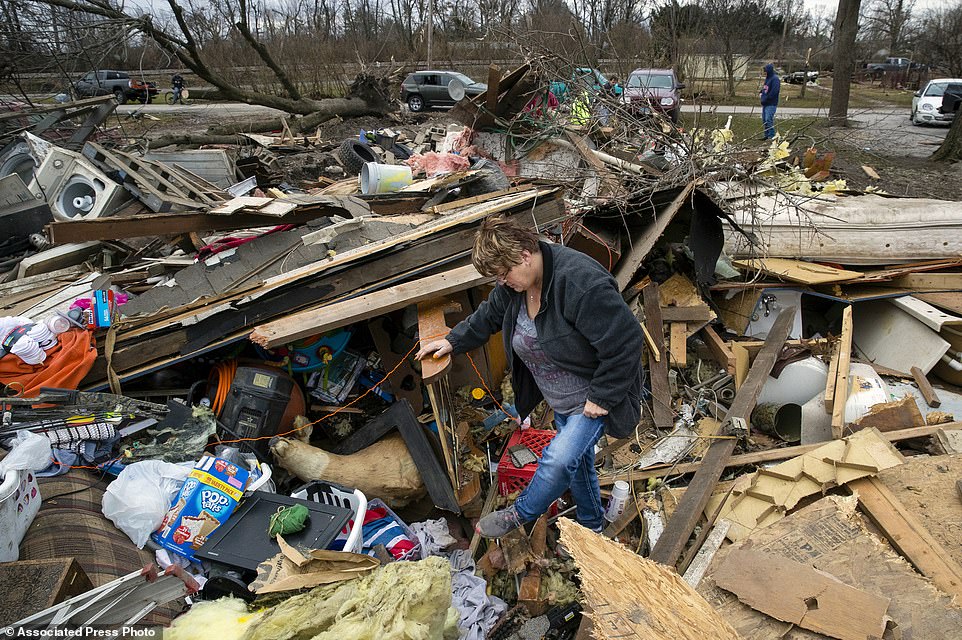 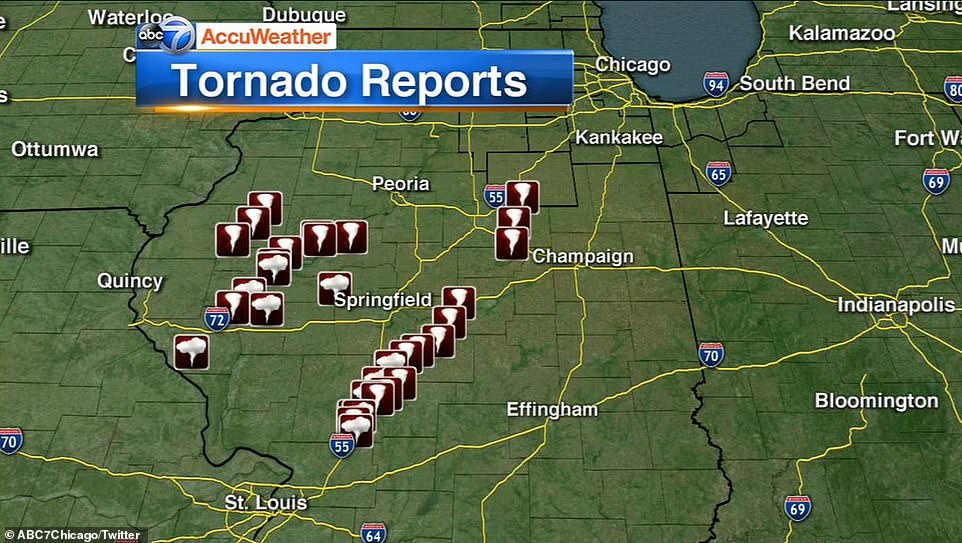 At least 20 tornadoes touchdown and were reported throughout the state Saturday, injuring dozens

The first tornado touched down in Van Buren, Arkansas, about 130miles northwest of Little Rock. The tornado was rated an EF2, which indicates wind speeds as high as 135 mph.

About 10 minutes later, a second weaker tornado was confirmed less than 10miles away near the town of Rudy, Arkansas and early Saturday morning a third tornado with estimated peak winds of 107 mph traveled about 8.5miles through Spring Hill in southwest Arkansas, about 110miles from Little Rock. Its path was intermittent and mostly caused damage to trees and to some structures.

But at least 12 tornadoes were reported in Illinois on Saturday, including the Taylorville tornado, which has been confirmed.

If the majority are confirmed, that would be the most tornadoes in Illinois in a December storm since December 18-19, 1957, when there were 21.

The weather service sent crews Sunday to survey the hardest-hit areas in Illinois, which included Taylorville, 25 miles southeast of Springfield.

Photographs and video from Taylorville showed several houses flattened, with residents wading into debris to salvage what they could.

Some homes remained standing but with gaping holes in the roofs or with no roofs at all. 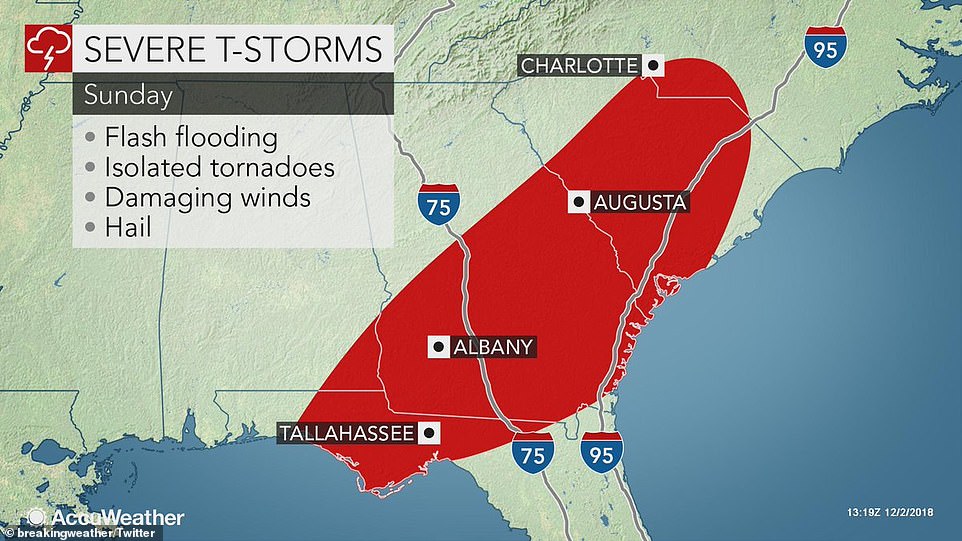 The storms spread as far as Florida and throughout Georgia, hitting a naval base 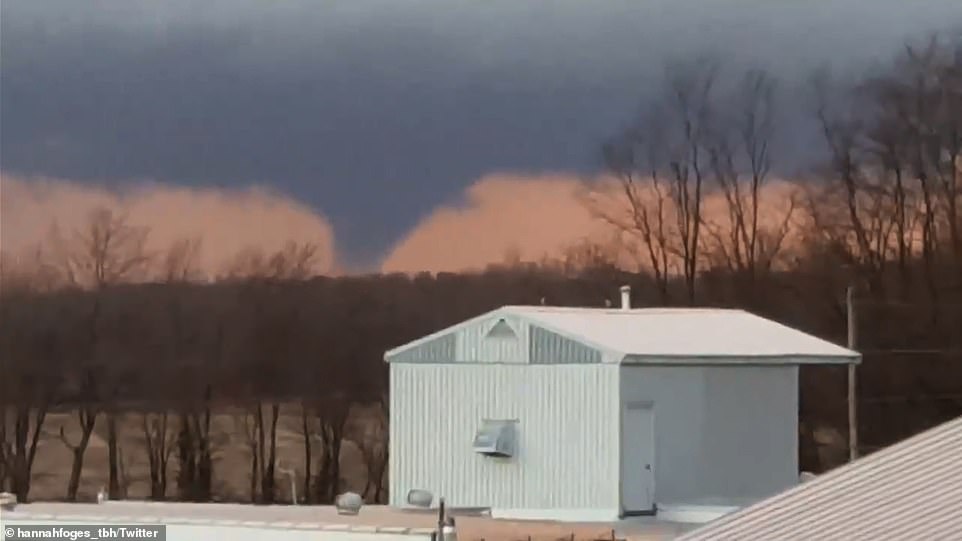 The ominous tornado is seen looming in the distance in Butler, Illinois Saturday 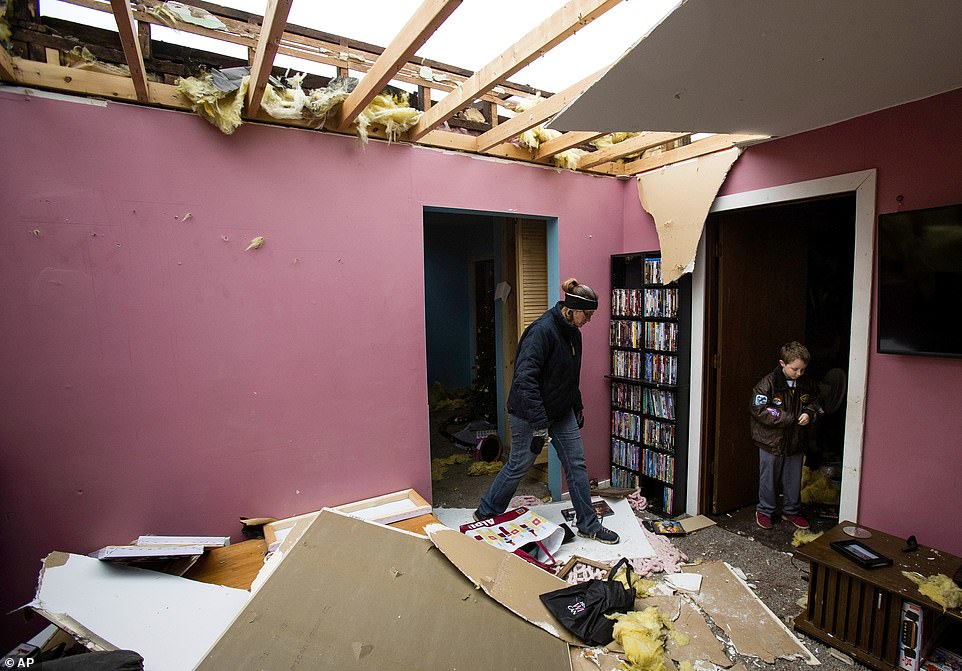 Tammy Bowers and her son David gather a few items from the interior of their tornado-damaged home in Taylorville, Illinois 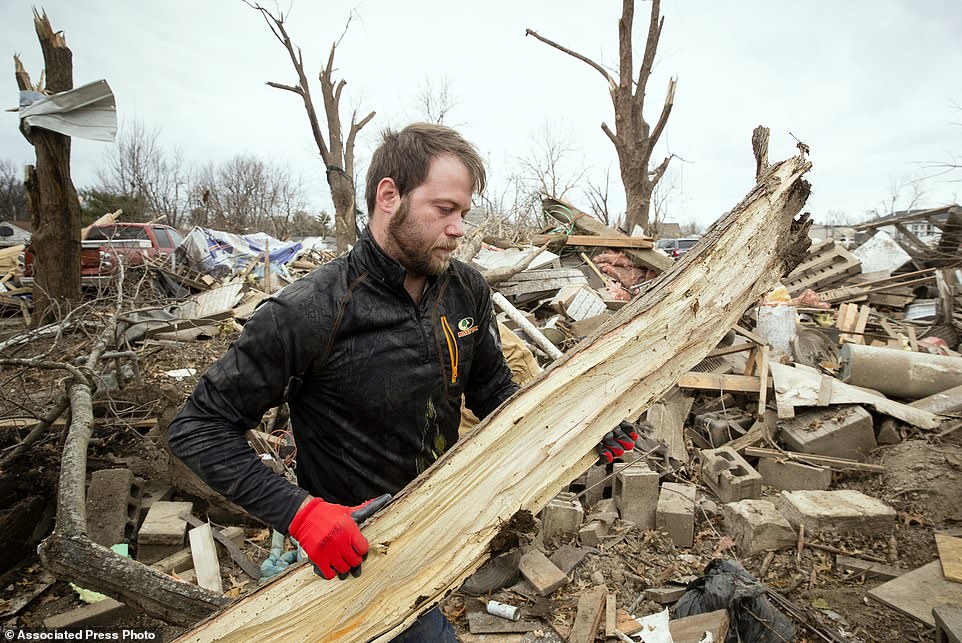 Peak months for tornadoes in much of the Midwest are April and June, making these storms very rare 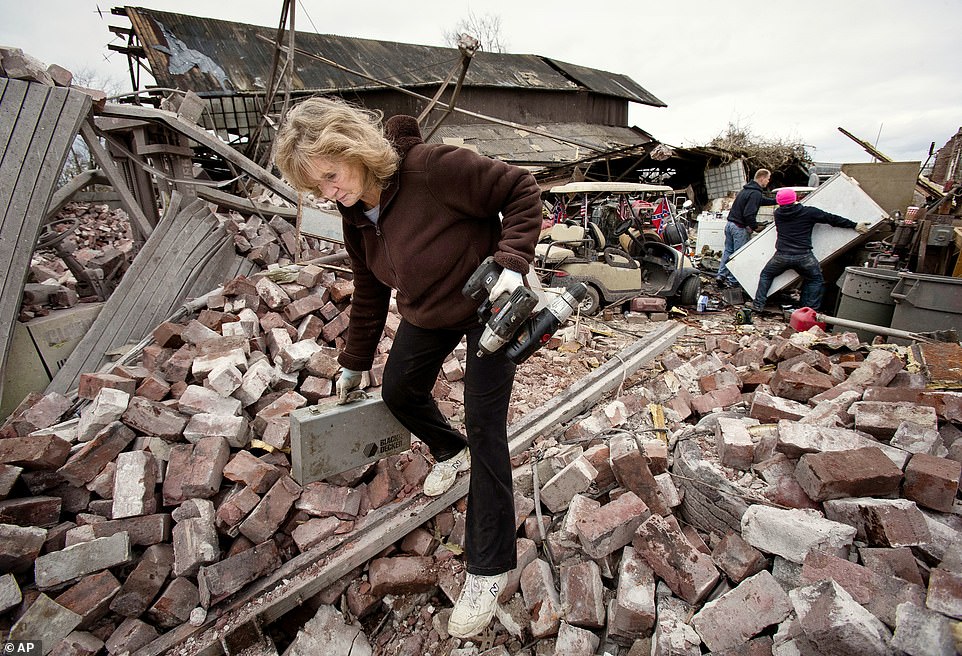 Marie Sheedy hauls salvageable items from the destroyed remains of her son Don's shop, an old train shed, as residents dig out and clean up tornado debris in Taylorville Sunday

The tornado was on the ground for around 10 miles before it thundered through Taylorville, and the weather service was able to warn residents of its arrival 41 minutes before it actually struck, Chris Miller, a meteorologist at the service's Lincoln office, said in a phone interview Sunday.

That advanced warning gave people critical time to take cover and may have saved lives.

Assistant Fire Chief Andy Goodall, speaking to reporters Saturday night shortly after the storm pounded the city of 11,000, said at least 100 homes had major damage, including his own, Springfield's State Journal-Register reported.

Most were released within hours. Miller said three people remained hospitalized as of Sunday afternoon.

Miller said preliminary estimates are that the Taylorville tornado may have been an EF2, which indicates wind speeds as high as 135 mph. It could take several more days to know for sure.