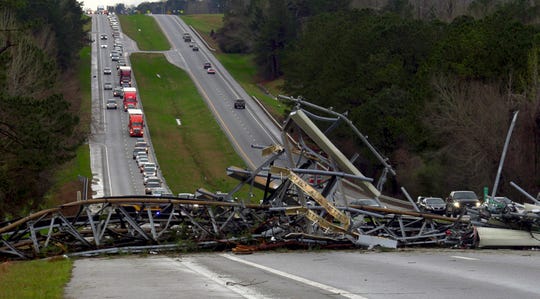 Several tornadoes hit the Southeast Sunday afternoon, killing at least 22 people in one Alabama county on the USA's deadliest day for tornadoes in almost 6 years.

The tornado wrecked an area several miles long and a fourth-of-a-mile wide, Jones told WRBL-TV. Numerous injuries were reported in the community of Beauregard, emergency management spokesperson Rita Smith said, where two deaths were confirmed. Details about the deaths were not immediately available.

More than 40 patients went to East Alabama Medical Center, the hospital said. Debris also closed part of Highway 431, according to the Alabama Department of Transportation. After issuing a state of emergency for severe weather on Feb. 23, Governor Kay Ivey extended it statewide Sunday night.

Sunday was also the USA's deadliest March day for tornadoes since March 2, 2012, when 40 died.

As of late Sunday, there were 26 reports of tornadoes in the South, according to preliminary data from the Storm Prediction Center.

Six to eight people sustained minor injuries, Ereheim said, but there were no known fatalities.

The tornado that hit Lee County, Alabama, was the USA's deadliest single tornado since April 27, 2014 when a tornado struck Vilonia, Arkansas.

It was also Alabama's deadliest tornado day since the infamous April 27, 2011 outbreak.

Severe weather was expected to continue into Sunday evening. Tornado watches end as late as 11 p.m. EST for parts of Florida, Georgia and North Carolina, the National Weather Service said.

"Colder air will sweep into the Southeast behind the severe weather with temperatures dropping into the 30s southward to central Georgia and across most of Alabama by Monday morning," AccuWeather meteorologist Kristina Pydynowski said. "Those without power who rely on electric heat need to find ways to say warm."

There are no tornadoes predicted anywhere in the U.S. on Monday or through the rest of the week, the Storm Prediction Center said.