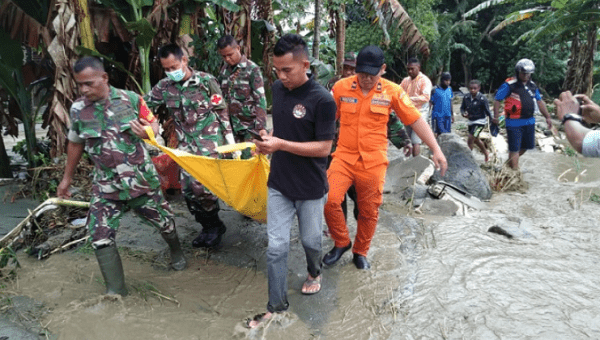 As many as 89 people are now reported dead, according to Indonesian authorities, after a devastating flash flood hit the country’s easternmost province of Papua over the weekend. Another 74 are missing and 159 people have been injured by landslides amidst heavy rains, according to a tweet from Sutopo Purwo Nugroho, spokesperson for Indonesia's National Disaster Management Agency (BNPB).

"The death toll continues to grow due to … the disaster,” Nugroho said in a statement.

Over 6,800 people were evacuated and 350 homes were damaged because of the storms and major infrastructure was also ruined or damaged, said Nugroho over Twitter. The vast majority of deaths and destruction took place in the city of Sentani near the Pacific Ocean coast.

The death toll rose quickly on Sunday as some waters receeded and rescuers were able to clear at least some debris left by the floods. More than 1,600 rescue workers from 23 government agencies and civil organizations are still working to clear buildings, trees and heavy mud in search of those unaccounted for.

President Joko Widodo called for urgent evacuation of victims. "What is most important is handling the evacuation," said the head of state in a statement posted on Instagram. The BNPB said the emergency response will continue until at least March 30.

In Sentani, 15 shelters have been established to help those currently without a home, but the emergency residencies are in urgent need of basic supplies such as food, blankets and clothing, says EFE News.

Nugroho has warned authorities in Sentani to be careful of further mudslides as the area surrounding the city are mountainous and heavily deforested.

Floods and landslides affect Indonesia each year during the rainy season that peaks between December and February.

A March 17 earthquake in the country has also left two people dead and over 50 injured.​​​​​​​