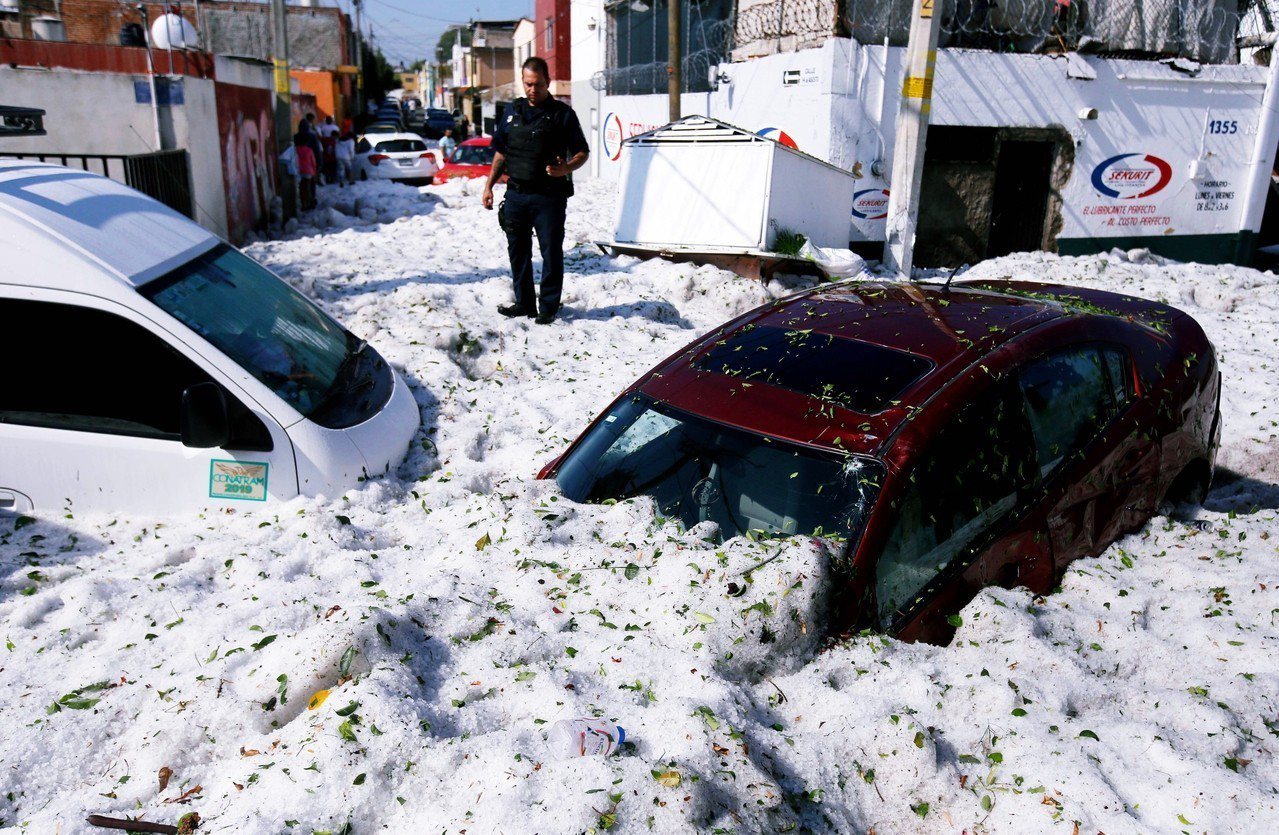 Water, slush and ice piled up to six feet (1.8 meters) high in the middle of the Mexican summer on Sunday. Viral videos and photos have been circulating online of buried cars and the residents of Guadalajara, a large city in central Mexico, digging out of icy muck.

Despite some reports that six feet of hail actually fell from the sky on Sunday, meteorologists online have been pointing out that the ensuing flooding after the intense storm more likely transported the precipitation to low points where it reached depths of up to six feet.

"These enormous #hail drifts are almost certainly the result of an urban flash flood during hail-producing thunderstorm, which washed huge volumes of hail ice from around city into culverts & low-lying areas. Ice floats, so it can go wherever floodwaters do," climate scientist Daniel Swain wrote on Twitter.

High temperatures in Guadalajara have been in the 80s F (around 30 C) the past few days, so all that hail certainly has a short street life.

Hail storms in summer are not particularly unusual, especially at high elevations. Guadalajara sits at roughly the same height as Denver. In fact, as Swain points out, similar events have happened to the north in the high desert plains of New Mexico as well.

So while an event like this might not technically be unprecedented, you'd likely have a hard time telling that to residents of Guadalajara who are unlikely to forget this past Sunday anytime soon.

'Hell Is Coming',What Lies Ahead for Europe's Climate

After a cool May, it finally warmed up in June in Germany. A lot. Last Wednesday, the thermometer near Guben in the northern German state of Brandenburg reached 38.6 degrees Celsius (100 degrees Fahrenheit). That marked the first time since measurements began in 1881 that a temperature that high was reached in Germany in June.

The record lasted for three days. On Sunday, thermometers in Bernburg, just northwest of Leipzig, hit 39.6 degrees. The average temperature for June is 20 degrees Celsius.

Almost half of the continent, from Portugal to Poland, was hit by a heat wave in recent days that was extremely unusual for this time of year. Madrid recorded temperatures of 40 degrees Celsius on Friday and Saturday, with one Spanish TV meteorologist tweeting "Hell is coming" just before the heat wave arrived. The Swiss town of Sion recorded 37 degrees on Sunday, the highest mark ever recorded in June in the country. In the Czech Republic, temperatures reached 38.9 degrees on Wednesday, also a June record for the country.

In France, where some regions saw temperatures of over 45 degrees, schools had to delay their final exams on Thursday and Friday. In Paris, many parks and outdoor pools remained open at night so that people could escape their hot apartments. The heat wave is conjuring terrible memories of the one from 2003, when almost 15,000 people died.

The world will soon find out how much of the current temperatures can be blamed on man-made climate change. German physicist Friederike Otto at Oxford University is currently putting together a quick study about the situation in Toulouse and France generally. The results should be available this week. This June, she says, was "quite extreme."

Otto and her team has already carried out similar investigations of seven northern European cities that suffered under last year's abnormally hot summer. The results show that, depending on the geographical location, climate change has increased the likelihood of such heatwaves by two- to tenfold.

In a world without climate change, Utrecht in the Netherlands would expect temperatures like these only once every 20 years. Now, though, they will occur every five years. The same, they claim, is likely true of many German cities.

Monday saw the heat wave break, with more normal temperatures expected through early July. But it remains unclear how the rest of the summer will unfold.

The private American weather service Accuweather is predicting a series of especially long heat waves for Europe in July and August -- over 38 degrees in Germany, Belgium and Poland, over 40 degrees in southern France and over 43 degrees in parts of Spain and Portugal.

A severe drought like last year is also in the cards, one of the company's meteorologists predicted in late May. He also warned of an abnormally high danger of forest fires, especially in Portugal and the Alps regions, and that the Balkans face a heightened threat of thunderstorms, perhaps even tornados, and floods. Eastern Europe and Scandinavia, he said, would largely be spared of the extreme weather.

Many meteorologists, though, tend not to take such long-term forecasts seriously. Respected members of the field make predictions for five days in advance at the most. Beyond that, they release only short-term trend predictions.

One of the Hottest Years on Record

But even though the details of the forecast for the 2019 summer in Europe are fraught with considerable doubt, the global situation can be predicted pretty accurately. The year 2019 will again be one of the hottest since the beginning of temperature records.

The El Niño year 2016 holds the absolute record for global temperature averages, and 2015, 2017 and 2018 were only slightly cooler. An El Niño pattern has developed again in 2019, and though it is weak, it explains why many regions of the world are heating up more than normal.

The Era of Hot Temperatures Has Begun

In the past 22 years, we have now seen the 20 warmest years on record. This accumulation alone is enough to show that climate change is already here. The climate that today's 40-year-olds experienced in their childhoods, a climate that had been quite stable for 11,000 years, is a thing of the past. The era of hot temperatures has begun.

The warming in the Arctic is particularly strong, at twice to three times as fast as the rest of the world. The mean temperature high in the north is already 2 degrees higher than it was 50 years ago. In parts of Alaska, it is even up to four degrees warmer. Much of the permafrost soil there are thawing at a rate that is shocking researchers, and as it thaws, it releases large amounts of the greenhouse gases methane and carbon dioxide (CO2) into the atmosphere.

In late summer, the sea ice only covers an area half the size of what it covered 40 years ago. Without the ice, the incoming sunlight isn't reflected as strongly back into space and its energy is absorbed by the water.

This has knock-on effects, including on the jet stream. This strong wind current at an altitude of seven to 12 kilometers in the Northern Hemisphere, blows from west to east and has a decisive influence on the weather below.

The strength of the jet stream is determined by the temperature differences between the Arctic and the tropics. With the polar region now becoming so much warmer, the jet stream is getting thrown off track more easily. In its weakened state, it meanders far to the north and far to the south, its course and speed now resembling a snaking country road more than a high-speed autobahn.

The result of these "Rossby waves" is that weather systems don't get blown away as quickly as they use to; they often stay in one place for a long time. Depending on the location of the low- or high-pressure areas, this can lead to prolonged rain or extended heat waves.

Researchers have shown that a special formation of Rossby waves ("wave 7 pattern") was rare before 1999 but has occurred more frequently since that time. And when it does, it almost always leads to extreme heat as seen in the European record summers of 2003, 2006, 2010, 2015 and 2018.

That wouldn't be in any way surprising. The greenhouse gas CO2 has reached a record concentration -- higher than ever seen in at least the last 3 million years. That CO2 concentration has been measured on the Mauna Loa volcano in Hawaii since the end of the 1950s. Back then, it measured 315 parts per million (ppm). Since then, it has risen from year to year due to the continued combustion of fossil fuels, to the present high of 415.7 ppm in mid-May.

That figure will fall again slightly in the coming months because more plants grow in the Northern Hemisphere in the summer and they absorb CO2 in the process. But then emissions will cause it to rise again and a new record will be set next April or May.

Although the countries of the world committed themselves in 2015 to reducing their CO2 emissions significantly through the Paris Climate Agreement, nothing meaningful has happened. Indeed, global greenhouse gas emissions have been rising since 2016, to a level that is currently more than 50 billion tons per year. Almost all the countries on the planet are to blame, but particularly China, India, the European Union and the United States.

A recent report by the United Nations Environment Program found that limiting the global warming caused since the Industrial Revolution to 1.5 degrees by the end of the century, would require global CO2 emissions to reach a turning point in 2020. And they would need to drop by an enormous 55 percent by 2030. By 2050, it would have to be zero. Those who do continue producing CO2 at that point would also have to find a way to pull it back out of the atmosphere at another spot.

The authors of the report wrote that none of these goals will be achieved through the current policies being pursued by the international community. And if things stay the way they are, the global average temperature will rise by at least 3.2 degrees by 2100.

And that would mean that the summer of the century seen in 2018 would indeed remain a rare event -- because the normal temperature would in fact be a lot hotter.