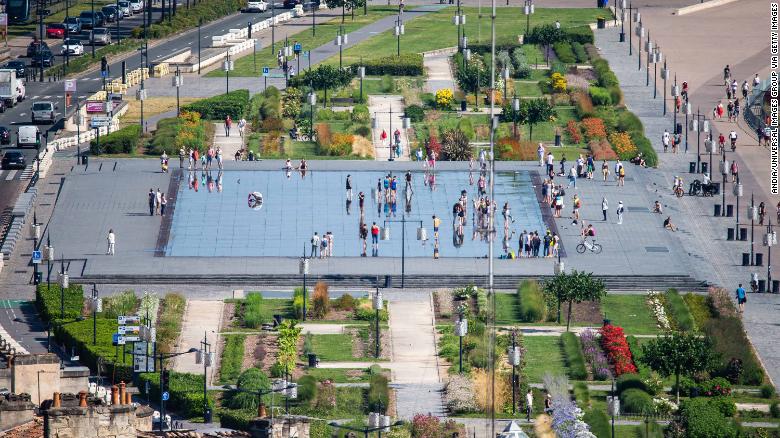 (CNN)A scorching heat wave is forcing Europe to realize how dangerously unprepared its cities are for climate emergencies.

Climate change is making heat waves increasingly common and more severe, putting the lives of thousands of vulnerable people at risk.
Hot weather gets deadly in places that are not ready for it. In August 2003, during one of the most severe heat waves seen in England in recent years, mortality across the country increased 16% because of the heat. But in London, 42% more people died compared to the average of the same time periods in the previous five years.

Temperatures in densely built-up cities tend to be several degrees higher compared to rural and suburban areas. The phenomenon, known as the urban heat island, is caused by the combination of surfaces that trap heat, low airflow, traffic and other heat-producing activities that happen in cities.
The difference tends to get bigger at night, as cities don't cool down as much as rural areas.
Older people and children are particularly vulnerable to heat in the cities, but extreme weather affects everyone.

"Healthy people in general are okay in hot weather as long as they take some precautions, but when it starts getting to about 40 degrees Celsius (104 Fahrenheit) even healthy people are at risk," said Bob Ward, policy and communications director at the Grantham Research Institute on Climate Change and the Environment, which is part of London School of Economics.
Productivity also dips significantly when temperatures increase. A 2018 study by Harvard School of Public Health found that reaction times of students sitting in a room with no air conditioning were 13% slower than those in cooler rooms.

It's a problem that's only going to get worse, because more people are moving into cities. According to the United Nations, 55% of the global population currently lives in cities. By 2050, that number will likely rise to 68%.
Europe is getting a taste this week of what the climate crisis has in store. France, Germany, Poland and the Czech Republic all saw temperature records shattered this week.