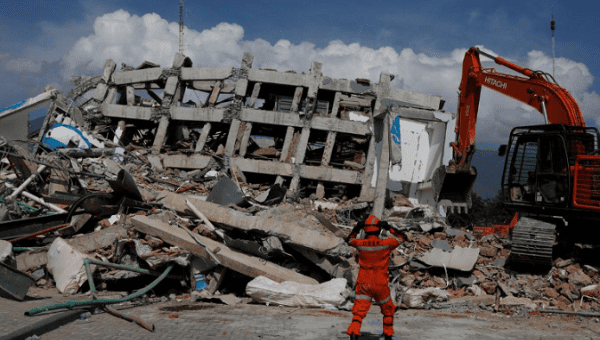 Indonesia has been hit hard by earthquakes over the past 24 hours with the latest jolting North Maluku province in the eastern part of the archipelagic country with a 6.1-magnitude quake Sunday morning. No tsunami warning has been issued.

The quake epicenter was located 141 km northeast of Bitung, Indonesia at a depth of 37 km, according to the United States Geological Survey (USGS).

The quake was felt in Ternate in North Maluku but residents there weren’t worried.

"I was watching TV when the earthquake suddenly happened. The jolt was quite strong but thankfully it was quick so there was no panic," Ternate resident Budi Nurgianto told AFP.

There have been no reports of deaths or injuries from the geological event and the USGS says there are no reports of affected land or landslides due to the earth’s movement.

"We are still checking to see if there's any damage," said Rahmat Triyono, head of Indonesian weather agency said.

Hours prior a 5.4 earthquake on the Richter scale shook the island of Sulawesi further east of Ternate at a depth of 10 km. It was originally reported at 5.8 magnitude.

Last September, Sulawesi experienced a 7.5-magnitude quake and tsunami that together killed more than 2,200 people and left 1,000 missing.

Indonesia has also been experiencing

in Papua province that, along with landslides and flooding, have killed at least 89 people.