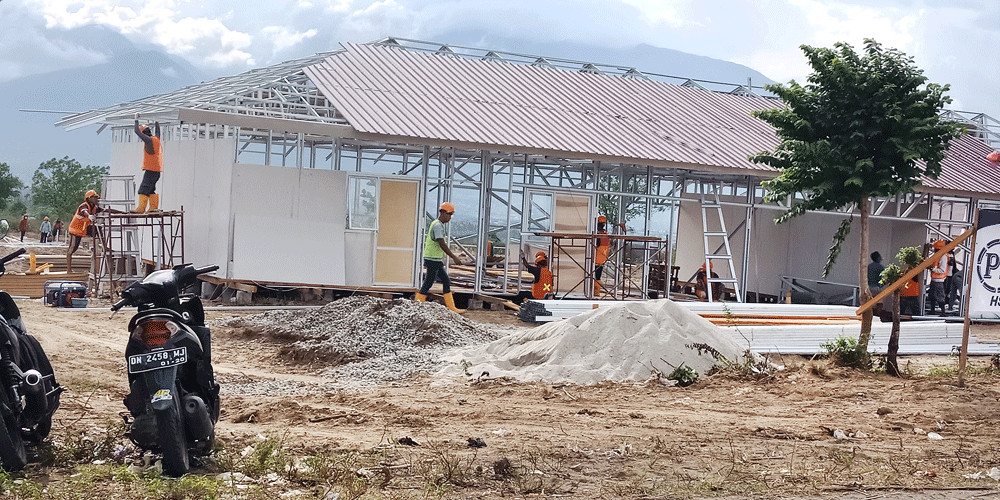 Central Sulawesi Governor Longki Djanggola on Wednesday revealed the result of the administration’s final count of victims in recent deadly disasters in the province, noting that the powerful earthquake and subsequent tsunami and soil liquefaction last September had claimed 4,340 lives.

According to the governor, the final count was specified in a gubernatorial decree on earthquakes, tsunami and liquefaction victims in September 2018 and in a letter forwarded to the National Disaster Mitigation Agency (BNPB) for the disbursement of financial assistance for survivors.

Almost half of the fatalities, namely 2,141, occurred in Palu, which was most affected by the earthquakes and tsunami, while 289 people died in Sigi regency, 212 in Donggala regency and 15 in Parigi Moutong regency. As many as 667 people have been declared missing, while another 1,016 bodies were unidentifiable.

The decree also establishes the final damage count, unveiling that 17,293 buildings were mildly damaged, another 12,717 buildings sustained medium damage, 9,181 severe damage and 3,673 were declared gone. The damaged buildings were registered in different locations affected by the earthquake.

The Central Sulawesi administration had proposed to the Social Affairs Ministry to disburse financial assistance to the victims’ next of kin, who are supposed to receive Rp 15 million (US$1,062) per person. The administration also proposed to the BNPB to provide cash assistance to the owners of damaged houses. Those whose damaged houses were located in the red zone, or the disaster-prone area, are entitled to temporary and permanent housing and will be given financial assistance for the first 60 days of staying in the temporary housing.

Meanwhile, each owner of a severely damage house will get Rp 50 million and assistance for the first 60 days of staying in temporary housing. Owners of houses with medium and mild damage will get Rp 25 million and Rp 10 million, respectively.

Some of the survivors of the disasters still live in shelters.

Andi Kharisma, a survivor from Balaroa, which was badly affected by soil liquefaction, revealed different problems in the shelters, including uneven distribution of supplies and a lack of clean water, which triggered conflict among survivors and volunteers.

“One time, evacuees suspected that [supplies] had been deliberately kept inside a warehouse, so they barged in and unloaded the logistics themselves,” she said, pointing out that evacuees had not received material support in the past two months.

Dedy Askary, the chairman of the National Commission on Human Rights (Komnas HAM) in Central Sulawesi, criticized the provincial administration for poor post-disaster management, saying the province deserved a “bad rapport” for its slow response to the disasters.

He mentioned the ongoing emergency status in the province as an indication of the administration’s slow and poor response.

“Survivors had to stay even longer in shelters when they were supposed to move to temporary housing,” he said.

The province declared the emergency status from Oct. 13 to Oct. 26, 2018, and introduced the so-called transitional period from emergency to rehabilitation and reconstruction from Oct. 26 to Dec. 25, 2018.

“The administration has announced plans to have all evacuees move into the temporary housing during the transitional period but failed to meet the target,” Dedi said.

The Public Works and Housing Ministry reported in January that the ministry had only completed 217 of 699 temporary housing units. Each unit comprises 12 12-square-meter rooms.

“We have handed over the 217 units to the Central Sulawesi administration,” Minister Basuki Hadimuljo said in a statement. (swd)