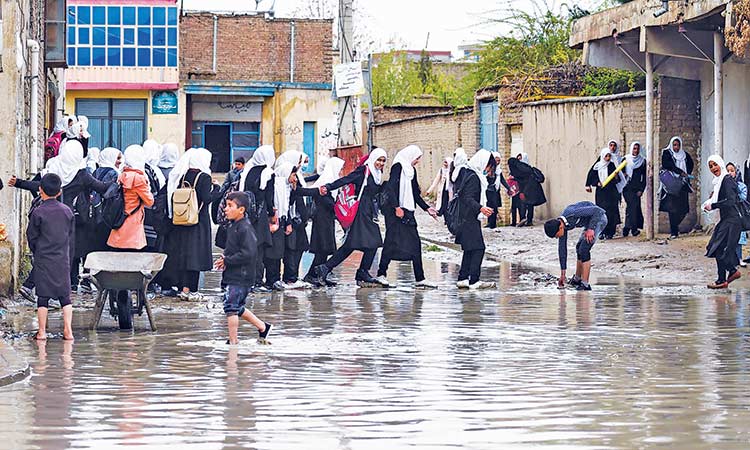 Torrential rainstorms have lashed drought-stricken Afghanistan in recent days, bringing widespread flooding that has killed at least five people and washed away homes including in the capital Kabul, officials said Tuesday.

While some welcomed the wet weather after the punishing dry spell of recent years, residents complained about the lack of infrastructure and government assistance to help them clear up from the deluge.

Sixteen of Afghanistan’s 34 provinces were hit in the past 24 hours, destroying or damaging hundreds of houses and sweeping away livestock, said Hashmat Bahaduri, a spokesman for Afghanistan’s National Disaster Management Authority (ANDMA).

Hardest hit was Herat province in western Afghanistan, where at least five people were killed when their houses collapsed, Jilani Farhad, a spokesman for the local governor said.

Officials were also searching for 17 people whose minivan was swept away by flooding in the province’s Obey district late Monday, Farhad added.

“There were women and children in the vehicle, we are searching but haven’t found any sign of them yet,” he said.

Extraordinary scenes played out in the capital, where the usually parched Kabul River swelled suddenly, bursting its banks in places and swamping surrounding streets and neighbourhoods with about one metre (three feet) of water in places.

Drug addicts who normally spend their time in the riverbed or hiding under bridges could be seen openly smoking opium at street level as water swirled around them.

By Tuesday, authorities were warning locals living along the river to be prepared to evacuate their homes as water levels surged.

Bahaduri said 113 houses had already been partially or completely destroyed in Kabul.

In the capital, a university student named Mujtaba bemoaned a lack of drainage canals, but others welcomed the rain.

“It is a bliss to have all this water and rain, we are thankful to God to have rain and get rid of the drought problems,” Kabul resident Mansoor Majab told AFP.

This winter saw heavy snowfall across parts of Afghanistan, which had led to flash floods in the spring melt.

Over one hundred people had been killed as of March 28 due to flooding in Afghanistan so far this year, according to ANDMA.

The United Nations Security Council condemned Afghanistan’s Taliban on Monday for announcing a spring offensive and called on all parties to instead seize the opportunity to begin talks.

In a unanimous statement, the council said the Taliban’s announcement will “only result in more unnecessary suffering and destruction for the Afghan people.” The Taliban launched attacks near the northern city of Kunduz and in Kabul on Saturday, hours after announcing the start of the spring offensive. At least nine people were killed and scores wounded in those attacks, according to Afghan officials.

The bloodshed came as the US pushes for a peace settlement with the Taliban, and ahead of a new round of talks expected to take place in Qatar later this month. The Security Council “called on all parties to the conflict to seize the opportunity to begin an inclusive intra-Afghan dialogue and negotiations that result in a political settlement,” said the statement.

US officials have already met several times with the Taliban and further talks are expected in the Qatari capital Doha later this month that would include Afghan political leaders.

Zalmay Khalilzad, the US diplomat who has held several rounds of talks with the Taliban in hopes of reaching a peace deal, called the announcement of the spring offensive “reckless” and “irresponsible.” To facilitate travel to Doha, the council has lifted travel bans for 11 Taliban delegates, including Mullah Abdul Ghani Baradar, a cofounder of the hardliner movement and its top political leader, as well as Sher Mohammad Abbas Stanikzai, the Taliban’s former deputy minister of foreign affairs.

Afghanistan published on Tuesday a lengthy list of delegates who will meet with the Taliban in Doha this week, including government officials, in what could become the highest-level dialogue between the sworn enemies in years.